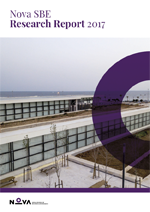 An important contribution from a group of researchers from Nova who estimated the cost of capital in Portugal.

A project led by a group of researchers from Nova University - Maria Eugénia Mata (Nova SBE, Economic, Business and Financial History), J. Rodrigues da Costa (Nova SBE, Finance, EURONEXT-NYSE) and David Justino (Nova, FCSH, Economic Sociology) gives an important contribution to the understanding of the development of the capital market during the XXth century in Portugal.

Not much was yet understood about the development of the Capital Market during the XXth century in Portugal, because much of the attention of our scholars so far has been concentrated on our banking system. In particular, the Cost of Capital for long-term investments had never been the object of a deep investigation, in spite of its relevance both for the recent phase of re-privatization (mainly in the 90s) of those companies nationalized in 1975, and for validating a significant number of political decisions to develop large infrastructure projects within the modernization of the country.

The importance of going beyond the US Cost of Capital

Until recently the US cost of capital was used in the rest of the world but even that based on a database that covered only the period after 1926. In 2002, Dimson, Marsh and Staunton unveiled a study spanning a longer period (from 1900 on) and covering a comparable sample of 16 countries (without Portugal) representing more than 95% of the world stock market which showed that:

• the cost of around 8% traditionally extrapolated from the US experience may be somewhat exaggerated, implying that some projects are rejected

Estimating the Cost of Capital in Portugal

The project estimated the Cost of Capital in Portugal from a historical point of view, and was based on the evolution of the share index constructed from the quotations of the corporations listed in the Lisbon Stock Exchange. 1

This project measured the annual total gross returns of the listed companies which, compared to the risk free local rate of interest, produced a first estimate of the average long-run cost of equity. Additionally it was possible to agree with those cited three authors to include Portugal in their annually updated study of world cost of capital, which occurred with the Feb/2014 issue of the “Global Investment Return Yearbook”.

Enhancing the knowledge on positive factors for economic growth